The Association Centre for Community Media Development MEDIUM is established of group of journalists and civil society activists on 2006 in Gostivar while officially registered in 2007. MEDIUM works in development of professional skills of journalists; supports the enhancement of education for journalists; and cooperation among journalists from Macedonia. MEDIUM provides professional educational programs in the field of journalism, researching, monitoring and analyses; implements specialised trainings for public relations for the representatives of the civil society organizations, units of the local self-governments and business sector. In 2008/2009 MEDIUM implemented the project “Dignity for woman’s vote”, supported by the United Nations Development Programme (UNDP) through the program “One voter-one ballot: Addressing the proxy and family voting”. MEDIUM has prepared TV spots under the motto “You vote, with your hand”, aiming to raise awareness of the rural women for the right to vote and free elections and to discourage the proxy and family voting. The short spots that involved successful and respected women from rural areas of the Polog region were presented in the local electronic media in Gostivar and Tetovo during November and December 2008. During 2009/2010 MEDIUM implemented a project “Media in combating corruption at local level” supported by the US embassy in Skopje. This project aimed to introduce the local media (printed and electronic) and civil society organizations (CSO) from Gostivar and Tetovo with the legal framework in the anti-corruption area and to increase media reporting and investigative journalism at local level. 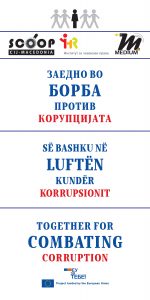